In 1983 Stefan Bellof had a contract with Willy Maurer for 10 Formula 2 races, which unfortunately did not work well due to technical defects and other unfortunate circumstances. Many people named Stefan the "Pechvogel" of the year. At the same time, he drove the Werksporsche 956K and was able to reach the record round of 6:11:13 min at the Nürburgring. In the middle of the season (Formula 1 GP Hockenheim) Stefan came into contact with McLaren Team chef Ron Dennis. This test resulted in a test drive for the McLaren Formula 1 team.

SB-Official: "In 1983 Jochen Holy (company boss) came up with the idea to start Stefan at the Grand Prix of Europe in Brands Hatch in an older McLaren with Ford engine."

Goa: "That was at least planned. From the deal was unfortunately nothing. The exact background I do not know. I only know that due to these plans the test drives were set up in Silverstone with the best young riders at the time, Ayrton Senna, Martin Brundle and Stefan."

"Boss boss Jochen Holy wants to let it cost 100 thousand people to finance the Grand Prix premiere of the Formula 2 Pechvogel of the Year."

SB-Official: "To what extent did Stefan’s Porsche work contract influence his invitation? McLaren wanted to drive with Porsche engines in the coming season. Has that had an influence?"

Goa: "This is quite possible, although it was an order that was handled externally. Mansour Ojjeh, the co-owner of McLaren, paid this over his company TAG. So, it was a foreign task. Porsche were the Turbo-pioneers, so they knew best with the Turbo-motor."

SB-Official: "How close is the history of the first Formula 1 debut at the time? Were the negotiations far advanced and concrete or rather a preliminary?"

Goa: "As far as I know it was already quite concrete, because the company Boss does not let itself get carried away anything and something in the blue. The whole situation around this first Formula 1 start was already quite good. It has then shattered at short notice, perhaps because you thought you can not afford to compete with a McLaren, which has a subdued Ford engine. But it came first to the famous test session of the three Youngsters."

SB-Official: "That was on 27 October 1983 in Silverstone. There Stefan climbed at 11:42 in the Formula 1 cockpit of the McLaren. How was Stefan's mood before the test ride and how were the preparations for the test?"

Goa: "Of course, Stefan was excited and excited. It was so that in the run-up had made it clear that this test ride takes place. It was then also known who participated in the trips that a Brazilian miracle child should be there. Stefan asked me if I could fly with him. I said: Of course! It was very interesting, too, for me."

SB-Official: "When did you land in England? How was the trip there?"

Goa: "We were there one day before, on Wednesday, there. At that time, McLaren-typically everything was done 100%. We arrived at the airport and were picked up by a McLaren employee who drove us straight to the factory. There, the seat was prepared for the upcoming test ride. Stefan also got a car available for the time in England, a 3500 Rover. In the evening, we went to a small pension just before Silverstone. We stayed there and had dinner." 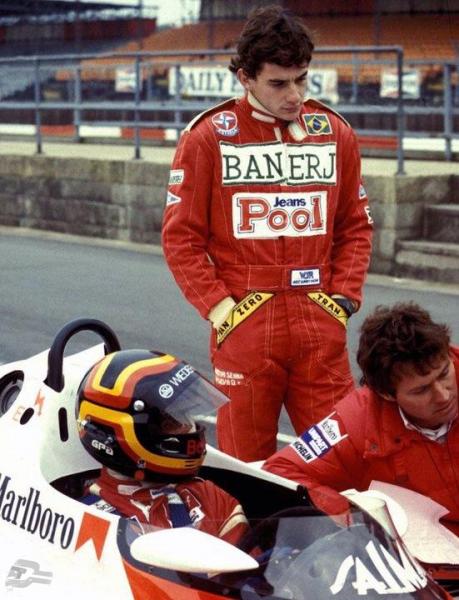 SB-Official: "What was your impression of the McLaren factory? After all, McLaren was one of the top teams in the Formula 1 circuit at that time."

Goa: "The factory was a sight, I was completely plowed! A surgical tract was nothing. This was all sterile, no droplet of oil on the ground or any other dirt particles. Everything was very professional, you quickly noticed that you were a guest team. McLaren were also the first to build a carbon body. The other teams were still using aluminum and rented bodies. Perhaps you can remember that John Watson in 1981 suffered a serious accident in Monza due to this carbon body largely uninjured."

"This is already a top team. About 90 people work there, and everything is perfectly organized and clean - almost like in a kitchen. "
(Stefan Bellof, from the rally racing, issue 1983-12)

SB-Official: "Did you meet the other drivers on Wednesday?"

Goa: "We had only contact with the mechanics and project managers who were responsible for this. The other drivers we have not seen at all. The next day we went quickly to the test track. * Laughs * Light warmup made! On the track was also Ayrton Senna with the Globo TV television team. The Brazilians have tracked the complete ascent of Ayrton at that time. I believe, they have already reported on Senna in his kart times."

SB-Official: "What was the mood among drivers? Did they talk to each other?"

Goa: "It was like we were all together. We already knew Senna from Kart. So, they have normal conversation with each other. Everyone has, of course, seen that he leaves a good impression."

SB-Official: "How did the test day continue?"

Goa: "It was first shown the car and explained. John Watson came, the car has been warm and has handed the car to the Three. As far as I remember, Stefan was the last one who drove. The others went first. Senna had engine damage after a few laps. The vehicle had to be directed again, which led to a time delay."

SB-Official: "Stefan explained that the vehicle in the first rounds tended to be under-steering. There was a tire change on a tougher rubber mixture, after a few further laps the front wing was changed again. And then came the famous scene, which was later taken up by the press."

"In the Woodcote chicane (three lined lines lined up), the McLaren pushed the front wheels sharply in the corners, but the stern broke out when they were accelerated out of the corners. Since I am then stop once, until the stop deflected, drifted across the target straight. As right as Walter Röhr."

Goa: *laughs* "Yeah, you could see from the boxes well, as the car came out quite right out of the corner. They were very enthusiastic about Stefan's vehicle mastery and how he moved it. You have to say, at the time Stefan was sitting in the car, he was the fastest of the three. In the end, Ayrton got softer tires again and then it was faster. But we had already left because we had to get our plane back to Frankfurt." 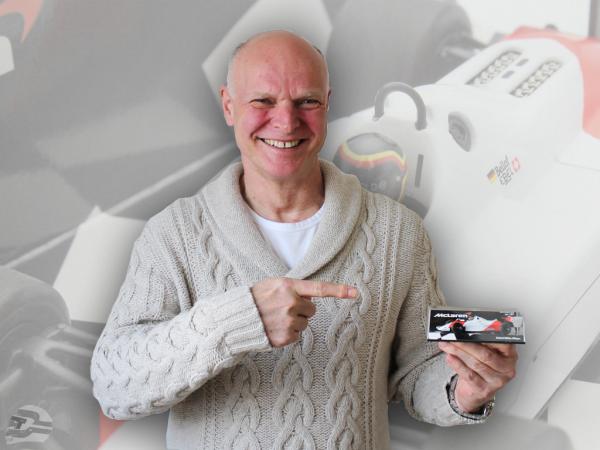 Round time of the test:

SB-Official: "Ron Dennis should have shown the Stefan a "thumbs up". Was there any feedback from Team chef after the test?"

Goa: "Ron Dennis came after Stefan got out of the car and asked for a talk. We then sat in the restaurant, Ron Dennis, Stefan, me and Olaf Meidt from the rally racing was also there. On Wednesday evening the latter suddenly stood in the hotel. Stefan and I did not know anyone was coming from the press at all. Ron Dennis then explained - and I still remember how today -: "What we are discussing here is nowhere in the newspaper, otherwise you can not go in here!" He was very satisfied with what Stefan handed down. The ride was great. He would be quite sure that Stefan would go his way, just not at McLaren, because the constellation currently does not give it. Conclusion was: everything was super, Stefan didn’t need to worry, he would get a Formula 1 contract somehow."

SB-Official: "How was the return flight to Germany?"

Goa: "The return flight was very entertaining. When Stefan and I traveled together, we always had fun. He had been more frequently on television at the time, so he was no longer quite unknown. After the stewardesses had recognized Stefan, we were generously fed by the ladies. We drank a little wine together. * Laughs * They have held me for their manager. All in all, a successful trip with a hilarious home flight."

SB-Official: "Has Stefan talked about how the McLaren car drives and where the differences to Porsche lie?"

Goa: "Yes. When he came into the pits for the first time, he said that the car was superior and under control, it would be terrible. At that time, there was no radio so you can speak directly with the engineer in the box. You have still driven into the box and then explained what the car is doing. The vehicles were tuned to the Lauda and Watson pilot pilots, so Stefan's configuration was not right. That was the way it was. But it was also about how someone who had never sat in such a car can deal with it."

The McLaren is very easy to drive. The steering is incredibly easy, which is no comparison with my Porsche 956 from the Endurance World Championship, where I had to crank a lot more and heavier. The two cars have about the same strength [...], but with the McLaren I can slow down much later and drive faster through the corners than with the heavy Porsche. The McLaren is best compared to the maurer-BMW, ??which I drove in the Formula 2 - his driving behavior is good-natured, but the border area comes abruptly. "

SB-Official: "Has the phone burned after the test? Was Stefan in his Formula 1 once again addressed to the test drive?"

Goa: "It was business as usual. The teams knew that the result was there and Stefan was not the worst. This led to a direct shift to the day’s agenda."

Read the next issue of Goa's recollections of how Stefan was negotiating with the Arrows Formula 1 team and how he came to his Formula 1 cockpit in the 1984 season.