29.09.2017In this issue it's called: Goa meets Hans-Joachim "Strietzel" Stuck.www.stefan-bellof.de

The Hockenheimring was the venue for the meeting between Hans-Joachim Stuck and Goa Bellof on 16 September 2017. The two motorsporters used the visit to the race track in Baden-Württemberg, among other things, to entertain themselves in the 1000 kilometer race on the Autodromo Dino Ferrari in Imola on the day, exactly 33 years ago Stuck and Stefan Bellof shared the cockpit of a Porsche 956B used by Brun Motorsport. The race was part of the long-distance World Championship 1984. The car with the chassis number 116 was painted in the colors of the sponsor huntsman. Hans-Joachim Stuck became popular as a driver in the Formula 1 between 1974 and 1979, entered the winning list of the 24 Hours of Le Mans in 1986 and 1987 and became a German Touring Car Champion on Audi in 1990. Today the native Garmischer uses his decades of experience as President of the German Motor Sports Federation DMSB. 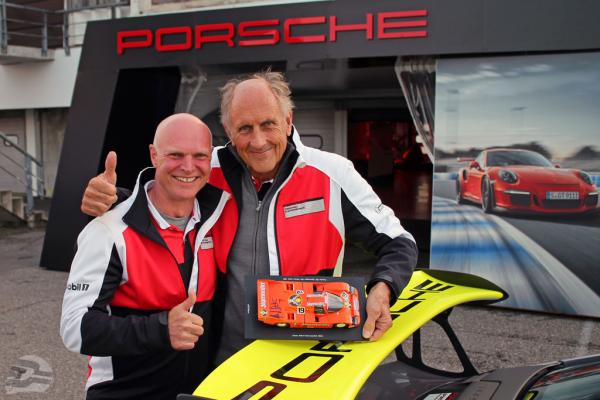 StefanBellofOfficial: Hans-Joachim, What is your first memory when you hear the name Stefan Bellof?

Stuck: The very first memory is that he was sauschnell. This is what I believe is a term that stands for Stefan Bellof: That he was incredibly fast and focused. And you have to say that he was really fast with all the cars he was driving with. As far as I can remember, we met for the first time in a race at Spa-Francorchamps. But I do not know which one. I drove with Harald Grohs in a private 956 and Stefan was in the factory car there. Already at our first meeting I noticed: This is a great guy! Sometimes you feel like you just like someone from the beginning. Stefan was then at his young age, just like me. We drove as the Hallodri, but we also knew when it was important. That gave us excellent.

StefanBellofOfficial: Did you have a friendly relationship despite all rivalry?

Stuck: Yes, of course, and I must also say: Thank God! That was very important. And what was still important to me: I had a huge respect for Stefan. Not only because of his speed, but also because, from my point of view, he lived his life as I always imagined it: in this change of tension and relaxation. He always knew, now he can have it krachen and now he must bring some performance. And to do that on the way he was - I must say, respect!

StefanBellofOfficial: Was there something that impressed you particularly with Stefan?

Stuck: He was fast on everything. And, of course, his whole way. I can imagine exactly how Stefan would be here now. Always turned up to 1000 volts, always have to watch what is happening around him. Just an open, funny and sau cool guy. And always that grin on the face!

StefanBellofOfficial: That's the Goa but also. * laughs * You have explained that the Porsche 956 requires a very special driving style. Goa has told you that the Stefan would have brought you the ride with the 956er.

Stuck: I had already tried all sorts of constructions. And when I drove with this Porsche for the first time, I just thought: That does not exist, how can that be? Accordingly, I started off with Harald Grohs in Spa and was 15 seconds behind Harald. 15 seconds! I just thought that can not be tackled! I thought: Stucki, now it's over, now old! Then the Harald has dealt primarily with Stefan and he has then afterwards busy with me. So I went with Stefan for the first time. At that time there was no telemetry. Only another driver helped me as Stefan, Derek Bell in Formula 2. Stefan told me every single thing on the car, what was important: How fast you drive, why you drive, how to brake, why so brakes, everything. It was a completely different world for me. I just hoped that I could do it. And indeed, I have been able to implement it by and by. But without his instructions I would not be here today. And that even though we were competitors! He still explained it to me very super and brought me without any self-interest, which I am totally great. Something like that is very rare!

Goa: After the race in Imola, we talked to him and he told me about it, and then we laughed two more terribly. * Laughs *

Stuck: Thank you! One must not forget: I have celebrated my greatest success with Porsche and not only because Stefan told me the car, but because I got his place when he switched to Formula One. If Stefan had stayed with Porsche, I would not be here today. That is why I must be doubly grateful to him. Then I remember something funny: I was allowed to take over his company car. He handed it over a week before, and I took it as he was. There were things of him like used air tickets and a few racing things. Stefan must have lived in the car!

StefanBellofOfficial: Today, September 16th, exactly 33 years after the 1000 kilometer race in Imola, what memories do you still have?

Stuck: For me this was a very difficult task. It was already difficult to drive but against Stefan Bellof and then also against the Porsche factory, since I have already had Muffensausen. But then I realized that it works. We were good, it all went smoothly with us and then to win was the hammer! Striking the factory, however, was not easy. I do not know what was going on at the Werksteam, but the main thing was that we won.

StefanBellofOfficial: Were Stefan and you far apart with your times?

Stuck: In the beginning yes, that has improved somewhat, but Stefan was always the faster. If a John winter drives faster or even the Stefan is faster, then I do not have to be ashamed. On the contrary, the lattice must hang up so that you have goals. One thing I will never forget: I have entered into some kind of turn, just as Stefan has gotten out and he called to me: Give gas, age! * Laughs *

StefanBellofOfficial: After the season '84 your paths separated. Stefan was in the direction of Formula One, while you came to Porsche, where you celebrated your greatest success. Goa has once let you know that it was a recommendation from Stefan that you apply to Porsche.

Stuck: Less recommended than timely announced. He said to me, "I'll leave Porsche soon," he said. (StefanBellofOfficial: Helmuth Bott was responsible for research and development at Porsche from 1979 to 1988, and therefore also for motorsport.) I did that, too, and he was quite surprised. He thought I had been married to BMW for decades. But there would soon be a place for him. I should go by tomorrow. So I went the next day. It also nobody knew that Stefan goes away, only thanks to his tip I had this information. Porsche could have taken other people, would have found better drivers than me. But that I was fast enough thanks to Stefan, was very important here.

StefanBellofOfficial: If he already so openly explained the technology and parameters of the car and in retrospect this tip, the sympathy must have probably been bilateral.

Stuck: That was undoubtedly.

StefanBellofOfficial: Then came unfortunately the 1 September 1985 and thus the tragic accident. You were driving his car for a few more years. Has that persecuted you?

Stuck: The show must go on. It went on for everyone else, even if it was not always easy. I lost with Jo Gartner a really very good friend and with Stefan a super mate, to whom I have a lot to thank. It took a lot of strain on me, but as soon as I sat in the car and the door was closed, it was gone - thank goodness! It was like a tilting mechanism. If I had thought of it during the race, I would never have been able to drive fast again. You always knew when you were unhappy in the front, you are going to lose or lose your legs.

StefanBellofOfficial: The times were different at that time and the risk and the risk were always part of the business.

Stuck: Yes, we all knew that. But the time with the 962 was already a Ascension Commando. If you are thinking about what I have driven by car at test kilometers. I also split a few, but always only from the back flank. Pure happiness.

StefanBellofOfficial: Did you live more intensively?

Stuck: I've always lived to 100 percent. One was aware of the risk and therefore gave full-throttle in addition to the race track.

StefanBellofOfficial: Are you once again in one?

Stuck: Two months ago in Spielberg, within the framework of the Formula 1 Grand Prix, we made demos with the 962er. Then the Gerhard Berger in the Williams F1 and the Mark Webber in the Porsche 918 drove. The car, the 962, was the hell! This has such curve speeds! The cars are just well maintained at Porsche, since you can start right away. Berger said I was stupid.

StefanBellofOfficial: Often you ask yourself the question, what would have been if. Now, at a distance of 30 years, what do you think Stefan could have achieved?

Stuck: This is a story we have often discussed. Stefan was absolutely on the level of Michael Schumacher, without any doubt. So the question is whether Schumacher's career would have been so if Stefan had lived. Stefan was a bit early and if he had got the right car, we probably would not have experienced an era Schumacher, but an era Bellof. I can imagine that incredibly well.

StefanBellofOfficial: Is there any sadness with you both?

Goa: Especially because he did not want to drive the race at Spa. And I say again and again, there is not such a thing!

StefanBellofOfficial: Thanks for the conversation. 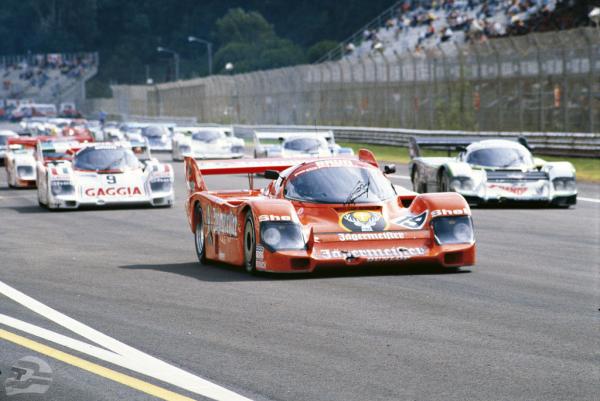 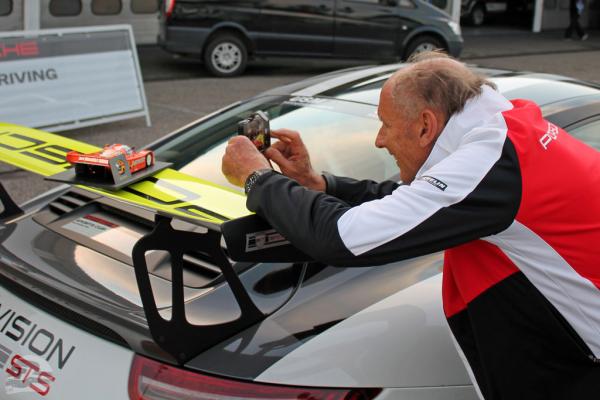 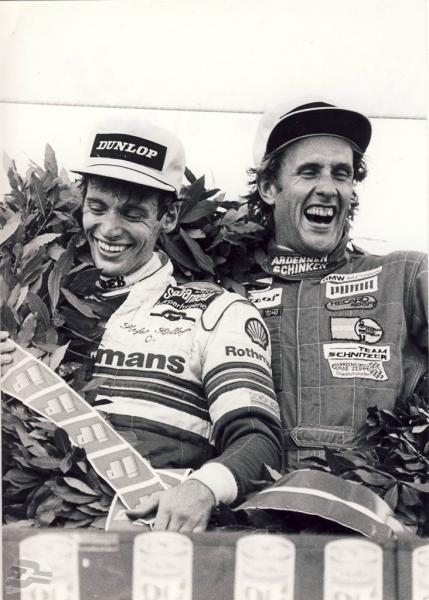 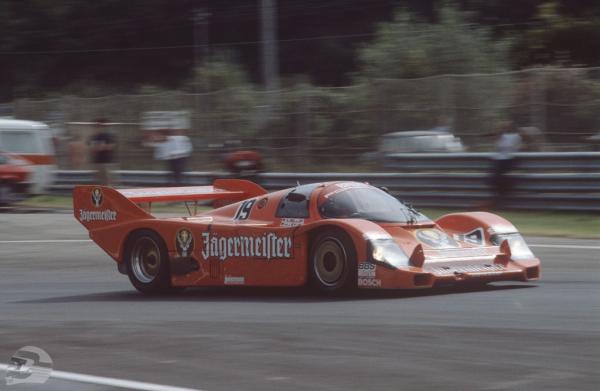