08.01.2019The model cars in the house of Bellof: Toys, Porsche and a Kreidler Florywww.stefan-bellof.de

It was a highlight of the Advent season: Quite before Christmas, Georg Bellof and the editorial staff of Stefan-Bellof.de had the opportunity for a detailed conversation. The content has a true rarity value: The model cars in the house of Bellof!

On the one hand, it was about the miniatures that are parked today in the showcase of the Porsche instructor, and on the other hand about the models from the youth of the brothers Stefan and Georg Bellof. As sons of the parental paint shop, they grew up with cars and like all the other little boys, they of course took care about the model of their time. No, they did not collect Minichamps models because the people from Aachen had not exist at the time. Stefan and Georg Bellof were children of the years 1956 and 1957, so they just had toy cars. The collector's models of today's quality, were technically, in terms of craftsmanship, not possible to build in the 1960s. But what did a moped have in common with the miniatures? And which car models are parking today in the showcase of Georg Bellof, one of the impulsive forces behind preserving the memory of his brother in form of this website? Only the Stefan Bellof collection? No, but somehow - yes. We checked it!

If two brothers, in form of year of birth, are only one year apart, the age difference then blurs in the childhood. Georg Bellof and his brother Stefan have experienced their beginnings in motorsport together, but at some point the family council decided to invest the family's money rather into Stefan. Goa, as the elder of them was known in motor sport areas, did not hurt it: He became an independent master dental technician with its own dental laboratory in Giessen and made his career just in this section. In terms of toy cars, the brothers were much closer in their preferences: The Porsche 356 - tin toy from the Schuco manufacturer – still indicated at an early age, where the journey of life would go automobil wise. But as in later life, the long-distance world champion of 1984 on Porsche 956 did not hesitate to take his toys a little harder than the brother handled it with his identical cars.

That was very clearly to see, so Georg Bellof: While Goa was extremely careful with the handling of his toys, the new condition and the optic of Stefan's cars was limited in time. What reminds Goa of a completely different story: "Stefan and I had been religiously confirmed in the same year. For my brother, the family celebration was more profitable: He became more money in the end. So he bought me my moped - an orange Kreidler Flory - and 'leased' it for two DM a week; for a year. But while my leasing period was over, the constitution was still perfectly, Stefan's was already in a terrible constitution, actually after a month." But there are advantages being a child of a paint master: the wood-356, at that time, was given a new layer of paint every year, so they kept looking new for Christmas, Goa recalls. But what about the topic of model cars at Bellof today?

The Porsche experience changed the attitude towards miniatures

"Model cars have not been my thing for decades", says the former entrepreneur, who had sold his successful dental laboratory long time ago and dedicates himself today to "teaching other people to drive": as an instructor in driving-safety-training at Porsche Experience. But with this activity, the love for the model car came. Simply because he has come into possession of popular and limited special models through Porsche, usually in the scale 1:43. This triggered something in him, and so, of course, you can find in his home showcase the miniatures of the Stefan-Bellof-Collection: The Porsche 956 from the long-distance World Cup in 1:43 from CMR, but also the Brun-Porsche 962 in design of sponsor Torno from Norev in scale 1:18. At the test drive of his brother in the McLaren in 1983, Goa was with him: No wonder that this matching model can be found at home - as now all Formula 1 of his brother from the time of Stefan in the premier class of motorsport.

Raving for Porsche in all sizes

Since the 51st calendar week, of the pre-Christmas week, Minichamps offers the Tyrrell 012 in 1:18 in the paint from the training of the Grand Prix of Monaco 1984, which differs from the version of the unforgotten rain race by a paint in the colors of cosmetics manufacturer Yardley: A real top novelty! Two equally brand new achievements are the ones that have recently given great pleasure to Georg Bellof: on the one hand, he raves about the model cars of the Ralt RT3, with which Stefan competed for the Gelo Junior Racing Team in 1981 in the German F3 Championship and which is produced by Minichamps in an Edition of 333 pieces in the scale 1:43 exclusively for ck-modelcars.de under the article number 447810303. On the other hand, Georg Bellof is enthusiastic about the model of the new Porsche 911 of the 992 series, which he already owns in 1:43 in yellow and with a glass roof. It has advantages if you are an instructor of the Porsche experience and participate in the meetings with your colleagues.

As recently in Mallorca, in the week before the conversation, that led to this article: Goa Bellof came into contact with the new 911 of the latest generation on the special event for the new Porsche 911 and is enthusiastic about the new edition of the sports car:" It's always incredible how Porsche manages to raise the bar! The new 911/992, as a whole construct, has once again grown over its predecessor, the 991 series: in comfort as well as in traction. Nobody can do the splits of comfort and sportiness like Porsche! How the new 911 drives and works is just awesome!" The fascination of Porsche, the brand that blesses the passionated fans and prepares happiness to the friends of the Stuttgart with their products. Those, who have parked their sports cars in the garage as well as those, who care for their home collection, represented in showcases.

Thanks to Goa Bellof, for this wonderful conversation! 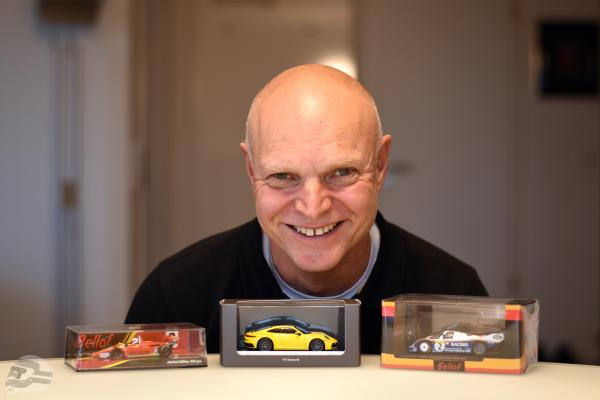